think I’ve OD-ed on J-drama. I’m beginning to hallucinate, I think. Well, not really, but I do think I saw a sign that I should try to break this habit. Over the past few weeks, we saw all 49 episodes of Shinsengumi. For those of you who don’t know, Shinsegumi was an organization that originated as a group of friends and associates of a modest, rural swordsmanship dojo–Shieikan–west of Edo in an area still known as Tama.

The son of the headmaster, Kondo Isami, was born a peasant, but was adopted to continue school. This, of course, placed him at a disadvantage. Throughout most of the Edo period, members of one class were not allowed to cross lines. A peasant or merchant could not cross lines and become samurai. A samurai, could till the land if he wanted, but he was still considered a samurai. Kondo became skilled enough to become the primary son who would inherit the Shieikan dojo, but he always faced discrimination as an inaka-zamurai (hick warrior). He and his friend Hijikata aimed at being “true” samurai, if not in lineage, then at least in heart. And this probably was their motivation for supporting the Tokugawa Bakufu, the military government of Japan. 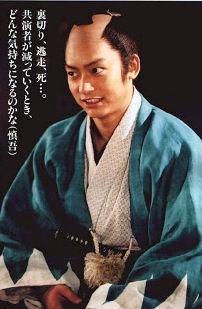 When there was a call for masterless samurai–at this time, they used the term roshi instead of ronin–to go to Kyoto help protect the Shogun during his say there, they gladly went with their peer and dojo mates. Upon arriving in Kyoto, there was a call to return to Edo by the organizers Sasaki and Kiyokawa. The story is that this was simply a ruse by Kiyokawa to gather samurai who he would eventually turn against the Bakufu. Kondo and Hijikata for whatever reason remained–according to the drama, they couldn’t accept returning to Edo without having done anything to protect the Shogun. They stayed at an inn in an area of Kyoto called Mibu and were hence known as the Mibu-roshi. From there, they worked to recruit more members and appealed to Lord Matsudaira–leader of the Aizu clan of Fukushima, official protector of the Shogun’s interests in Kyoto–to allow them to participate in their official endeavors of policing Kyoto. They actively worked to police the capital, and their efforts were recognized by Matsudaira, who designated them the Shinsegumi–Company of the Newly Selected. This name reflected what Kondo had always aimed for: a new band of brothers from all walks of life, chosen by merit, not lineage. After the Ikedaya Incident where the Shinsengumi squashed a plot by the anti-Bakufu members from the Choshu clan, Matsudaira named Kondo and the Shinsengumi hatamoto–direct vassals to the Bakufu. Unfortunately for the Shinsengumi, their idealistic image of the samurai led to an undying loyalty to the Bakufu and the inability to recognize the sea change occurring in Japan.

The NHK story, of course, romanticizes a group of men who killed indiscriminately in the name of the Shogun. In many instances, it is also humorous, thanks to the group af actors chosen play the main roles, first and foremost Katori Shingo of SMAP. I’m not sure if anyone noticed this, but on the back wall of the Shieikan are two calligraphy scrolls on which are the names of the gods that protect the way of the sword. One of them is *ahem* Katori Myojin. Still, the drama was fun to watch and I enjoyed Katori a lot. I was sorta sad when I watched the last episode. Maybe too sad…

For two nights after I viewed the last tape, Katori’s appared in my dreams. He wasn’t playing Kondo and IU wasn’t a member of he Shinsengumi. We were just hanging out..

Yup, I think I have definitely OD-ed on J-drama.

One thought on “J-Drama Junkie II”