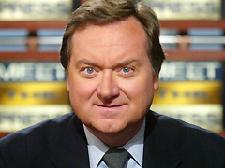 I wrote the other day abut how I love to watch these political shows. One of my favorites was Meet the Press on NBC Sunday mornings. During the 80s, I usually watched surfed between the shows on the three national broadcast networks–Face the Nation, This Week, and Meet the Press–but after I cam back from Japan in 1996, I watched Meet the Press exclusively because of the moderator, Tim Russert.

Moderators usually have to be pretty sharp about politics and people like David Brinkley were, although their delivery could be a little egg-headed at times. Others, such as Mclaughlin Group was interesting, but it was often contentious, with everyone yelling at each other. Tim Russert always hit the right note. He was down to earth, and spoke in a way that was always understandable. He was from Buffalo, NY, raised in a family of modest means, and loved sports. He was the average Joe. He was also very tough, especially in his interviews. He would put on the screen a quote attributed to the guest, read out loud, and then confront the guest: “Do you still believe this” or “Could you explain what you meant by this?” But he never yelled or seemed disrespectful. He was simply hardcore, not allowing a politician slide by with non-answers.

Well, this moderator for whom I have much respect died of a heart attack on Friday. This was very hard to believe. I had just seen him last Sunday on the air. He seemed perfectly fine. And he was only 58 years old. By all accounts, he was healthy, and even passed a stress test on his heart this past April with flying colors. Apparently, what happened was that cholesterol plaque that had built up in his artery ruptured and clotted his artery, stopping the flow of blood to his heart completely. From what I heard on TV, this is the worst kind of heart attack possible. Even when witnessed by emergency specialists, this kind of heart attack has only a 5% survival rate. That was an eye opener to me. I mean, you could get this kind of heart attack in a hospital, and your chances of survival would be low.

This reminds me of all the unhealthy things I’ve done in my lifetime–smoking for 30 years, eating unhealthy snacks and fast food, etc.–and compels me to consider my own mortality. Could I have built up enough plaque in my arteries over the years to kill myself if they ever ruptured? From what I know, there is really no drug to dissolve or reverse the build up already there. Kinda scary.

In any event, I looked forward to Meet the Press every Sunday, as well as to his comments and coverage of the presidential campaign this year almost every Tuesday on MSNBC. I will miss him greatly.