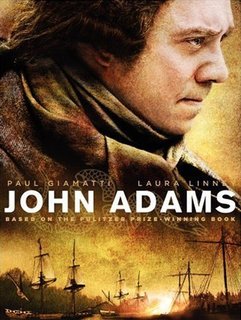 Today is the 232nd year of our nation, the 232nd year since the signing of the Declaration of Independence. I kinda pre-celebrated by watching the HBO special John Adams. I don’t get HBO but it went to DVD a couple of weeks ago and I devoured all seven hour long episodes in a few days. I thought it was very good, although I have to admit to being a bit of a fan of historical movies, and I mean historical. I’m not much for new history, like 9/11. That isn’t history to me; it’s recent news.

In any event, I found John Adams quite entertaining and I was rather surprised to see Paul Giamatti actually pull it off. I have to admit I was skeptical. My image of Giamatti is closer to his character in American Splendor and Sideways. Although perhaps I shouldn’t have sold him so short after his performance in Cinderella Man, although it was a supporting role. So if you are into US history and you enjoy watching the History Channel, then perhaps you will like this one too.

I also want to go to the National Mall today to watch the Capital Fourth, which includes a free concert and a fireworks display. I’ve gone three times before, but everytime–and I mean everytime–there was a thunderstorm and we end up not watching the entire event. Indeed, two years ago, the thunderstorm was so bad, it was rumored that the concert was cancelled. So we went home, I turned on the TV and guess what? The concert was on PBS. *sigh* I think God doesn’t want us to watch it.

Tomorrows forecast is also calling for thunderstorms according to Weather.com; 50% chance of precipitation. But I think we will try to brave it anyway. I know it’s old school, but I wanna watch Huey Lewis and the News. And I wanna beat the odds one of these days, although I doubt I’ll be successful. Maybe we should wear clothes that dries off easily, which would mean no jeans, but I don’t think I have any pants except for blue jeans. It’s like a part of my everyday uniform. I even teach in jeans. Yes, I’m a very dress-down teacher.

Then again, if it looks like it will be too much to bear, I bought some safe and sane fireworks to light up in front of our house. It’s nothing compared to the fireworks on the Mall, but it’ll do if I don’t wanna get drenched.

Everyone enjoy a safe and fun 4th of July.